on April 18, 2021
Don't know whether to buy the GoPro Hero 8 Black or the DJI Osmo Action? Our head-to-head review will help you decide

If you're confused about whether to buy the GoPro Hero 8 Black or take a punt on the DJI Osmo Action, you're not alone. Both devices feature amongst our best action cameras, and on the surface the difference between the two can seem a little confusing. The decision really boils down to why you're buying an action cam (so the main activity you'll be using it for) and your budget.

The DJI Osmo Action made a big impact on the action cam scene when it was released early this year, proving that the drone giant definitely has the tech chops to take on the mighty GoPro.

And pro-level stabilization software that makes physical gimbals a thing of the past, and almost identical technical abilities on paper to GoPro’s previous flagship camera, the T3 award-winning Hero 7 Black, DJI's debut action camera proved itself to be a worthy contender for GoPro’s coveted crown.

Does that still stand up in the face of the Hero 8 Black's souped-up spec, including next-gen tech in the form of HyperSmooth 2.0 and TimeWarp 2.0? Not to mention its compatibility with the new line of GoPro accessories called Mods, which includes an add-on light, add-on screen, and a microphone.

What initially set the DJI camera apart from the Hero 7 Black (and other equally rugged 4K action cameras) was the addition of an integrated front-facing display. It's super-handy for vloggers and anyone wanting to ensure they are perfectly in frame.

It was an astute decision, and one that GoPro has responded to by announcing the Mods, which, as mentioned above, includes an add-on flip-up front- or rear-facing screen (more on that later) for the Hero 8 Black. 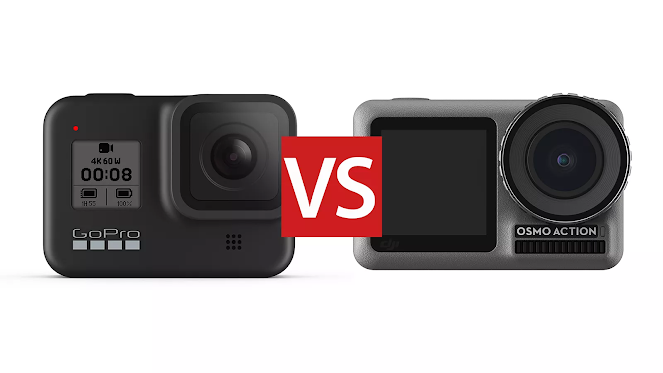 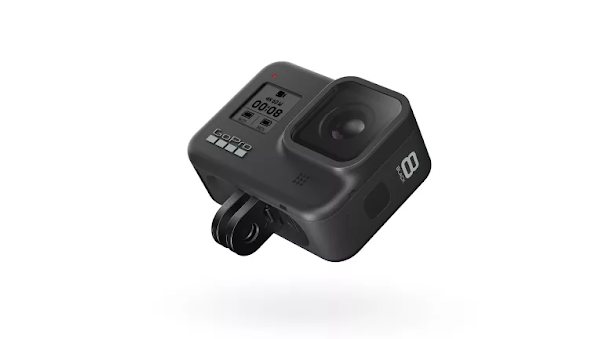 The Hero 8 Black may look fairly similar to its predecessor, but its new body is sleeker, lighter and slightly slimmer. The Osmo Action is more bulbous and a tad less stylish than its rival. Much of the GoPro’s body has a non-slip, rubberized finish and a solid weight that feels bombproof.

While it may be able to handle some serious knocks too, the DJI’s plastic body feels a tad cheaper and less robust in comparison.

Unlike previous incarnations and the DJI, the new GoPro doesn’t require seating in an additional frame attachment to fix it to mounts or other accessories. Instead, two fingers fold out from the base to securely attach to any existing GoPro compatible mount. The new frameless design is not only cleverly realized, but makes the Hero 8 Black more straightforward to use by removing the need to faff about with a frame. 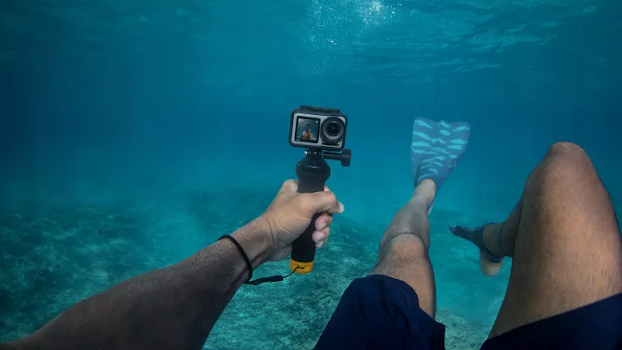 As mentioned above, the Hero 8 Black’s frameless design makes it easier to use with accessories, but where the Osmo Action has a big advantage over its rival is with its built-in front-facing display. The 1.4-inch screen on the face of the camera enables you to see exactly what’s in the frame as you record, making the DJI camera ideal for vlogging and any time you want to speak direct to camera.

Not to be completely outdone, while the standalone version of the Hero 8 Black does not have an integrated front-facing display, you'l be able to buy an additional flip-up screen dubbed the Display Mod by GoPro (£79.99/$79.99). Want the bad news? The GoPro Mods, a new trio of GoPro accessories (which also includes the Media Mod and Light Mod), won't be available for pre-order until this December.

The Display Mod outfits GoPro's new action camera with a front-facing or rear-facing display, but the price of a Hero 8 Black and a Display Mod doesn’t exactly come cheap. And that's compared to the DJI Osmo Action's aggressively priced £319.99 – and it's regularly on sale for under £300.

Navigating either camera is simple and intuitive using a combination of directional swiping of their touchscreens to access menu systems. Both sport a button that enables you to quickly cycle between shooting modes.

Each camera has its own dedicated app, via which you can control the camera from your device, edit your stills and footage, live stream and share your content. However, the range of creative options available through the GoPro app integrated with Quik are far more sophisticated than DJI’s more basic Mimo app. 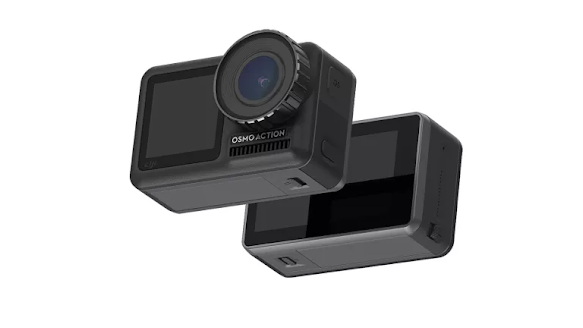 Both the DJI and the GoPro deliver ultra-sharp, premium quality results and have the capability to shoot at 4K60fps. Recording at full frame on each camera means using a ratio of 4:3. While the GoPro delivers full 60fps recording at 4K in this format, the DJI only hits 30fps. To achieve the stated 4K60fps, the DJI has to crop the 4:3 frame to 16:9, losing the top and bottom of the available image as a result.

Given the pedigree of the action cameras on test here, the ability to create ultra-slick slow-motion is pretty much a given and neither action camera disappoints. The GoPro and the DJI are very evenly matched here, as both can shoot with their maximum frame-rate of 24fps at 1080p.

Another feature common to both action cams is time-lapse mode, which enables you to create static videos taken with the shutter fired at selected intervals over a period of time.

But where the GoPro has the edge is with its TimeWarp 2.0 function (the original TimeWarp software debuted on the Hero 7 Black). This feature means you can create moving, stabilised sequences that are ideal for portraying the passage of time or travelling over a distance. A slick new feature enables you to switch between real-time and time-lapse recording with a tap of the touchscreen.

Taking stills with either camera also yields top-drawer results. Either one can take single or burst shots, but the Hero 8 Black also has a LiveBurst facility. This records a video clip which cunningly records 1.5 seconds before and after you fire the shutter, so you can select stills from the total recorded content.

Both cameras have a range of digital lenses to choose from. The GoPro’s SuperView gives the widest angle and is ideal for taking panoramic shots, or for getting yourself in view when taking action shots from close range.

While the GoPro Hero 7 Black came armed with the first iteration of GoPro’s hugely impressive HyperSmooth stabilisation software, the Hero 8 Black steps it up further with HyperSmooth 2.0.

The main advantages over the original are that stabilization is now available across every video resolution and frame-rate, and you can increase the level of stabilization further still by running it in High and Boost modes.

The DJI Osmo Action also has its own extremely slick RockSteady stabilization that produces equally excellent results. However, RockSteady tops out at 4K30fps and you can’t engage it when shooting in HDR, which gives the GoPro the edge in this category. 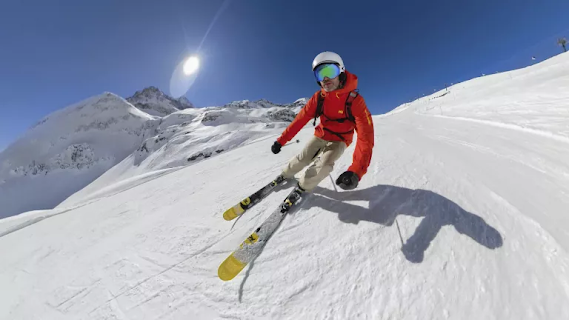 Along with the GoPro Hero 7 Black, both of these devices are worth serious consideration if you’re looking to splash out on a rugged, fully featured flagship action camera. However, apart from the DJI Osmo Action having the edge over the GoPro with its built-in front-facing screen, in every other department the GoPro Hero 8 Black comes out on top.

That said, the DJI does have another trick up its sleeve: its smaller price. At the time of writing, the Osmo Action has any RRP of £319.99. When compared to the Hero 8 Black’s launch price of £379.99, available for pre-order now from GoPro.com, plus the extra cash you might spend buying the optional GoPro Mods, you’re looking at a higher cost for the Hero 8 Black.

If you want to spend more around the DJI's price level, there's more good news for GoPro fans: you can now buy the Hero 7 Black for just £319.99. This new lower RRP indicates that the Hero 7 Black sits underneath the Hero 8 Black in the pecking order of GoPro action cameras, but it's still a cracking cam and a T3 Award winner.

Ultimately, which action cam you choose comes down to what you want to achieve with the camera. You can create stunning, high resolution footage and images with the vlogger-friendly DJI Osmo Action, but with the Hero 8 Black you can do exactly the same, along with the facility to do a fair bit more. Read more in our official review of the GoPro Hero 8 Black.